He adopted Cesar Chavez ideology of art as a social service. His art includes music, poetry and theater. He is the founder of Xicanindio Artes (now Xico, Inc.), the Cultural Coalition, Inc, and has been instrumental in the development of Latino Arts statewide.

He has exhibited and received international acclaim and many prestigious awards. In 1985 PBS broadcast a one hour documentary about his art entitled “The Mask of El Zarco”. He received the Japan Fellowship from the National Endowment for the Arts, The Arizona Governors Arts Award, the Artistic Excellence Award from American Hispanics in Higher Education and the Esperanza Teacher of the Year Award among many others.

He also won the 2012 Zony Award for his ground breaking work as a mask maker in Childsplay’s 2011 production of “The Sun Serpent.” He is the recipient of a Doris Duke Foundation grant to present theater to Latino communities in Arizona.  In 2015 he was recognized as a Master by the Southwest Folklife Alliance.  The New Times named him “Best Storyteller” in 2016.    In 2017 he was chosen to design the Light Rail Station at Baseline and Central Avenues in Phoenix.

“Art is a statement that goes beyond mere entertainment and the decorative unveiling of the sordid and the beautiful. The primordial growl of the mask is a reminder of our origins and kinship to the beast. The agony in some of the faces valiantly dare us to become aware that we are at least existentially responsible for the awesome suffering of the majority of the earth?s inhabitants and the destruction of the environment. In our plastic and polyester charades there will be those who wish to ignore the indicting eyes and wrinkled visages that seem to have witnessed the ravages and pillages of History. With integrity as an essential aspect of aesthetics, art should move us and in doing so force us to confront our notion of self and society in relation to the earth. In expressing the paradox of being, the mask challenges us to struggle, articulate and confirm the sanctity of life.” 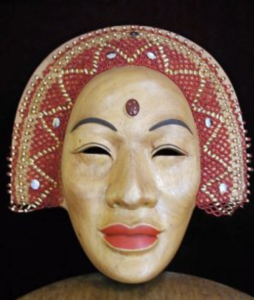 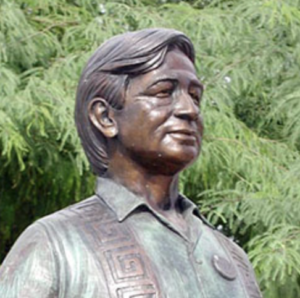 Carmen’s Bio: Carmen de Novais, founder and jewelry designer, started beading as a little girl in northeastern Brazil. Learning from her grandmother how to perforate and string seeds in the backyard, she delighted in making colorful, simple necklaces to wear and give to friends as gifts. Throughout her life, she has explored this traditional artform, constantly challenging herself to think of new ways and colors.  Carmen is a founder of Cultural Coalition.

Why Japanese Beads?
After working for many years with different plastic or Czech beads, I’ve settled into working exclusively with Japanese seed beads. Japanese glass beads are incredibly consistent in both size and color, and ideal for intricate beading and making fascinating and beautiful creations.